Martin Granger, the director at the helm of award-winning comedy campaigns for Progressive, Bud Light, Skittles, Holiday Inn Express, and Farmers Insurance, has signed with Holiday Films for representation in Canada.

Granger brings a well-honed eye for great talent, timing, and performance. His filmmaking career began after stints as an improv actor with Second City in Toronto and working crew for The Kids in the Hall.

After gaining international recognition directing breakthrough campaigns for Combos, Geico, and FedEx, he made the move to New York. “I’ve always been lucky to find myself in a position to be choosy with scripts, it was never about the money… although I do enjoy getting paid” says Granger. “Making good work brings more good work and the scripts coming out of Canadian agencies right now are great. As many people know, comedy is Canada’s second largest export to America….right behind soft wood. And I don’t even know what “soft wood” is.”

“Creative teams know I’m all about making their idea better. “We’ll always get the script nailed first then we spend some time to try and make it better. I understand and empathize with actors and that helps me get them to a place that sometimes, none of us expected, but you know immediately it’s good”.

“We’re thrilled to have Marty join us,” says Josefina Nadurata, co-founder and executive producer at Holiday Films. “His polished style of comedy combined with his charm and relaxed manner on set are a perfect fit for both Holiday and the Canadian market.” Granger echoes the same good chemistry, “I feel at home with Holiday. We have a similar ethos – quality first, no crappy work, and let’s have some fun”

That ethos pays off. Granger has won his fill of Lions, Clios, Sharks, Bessies, D&AD Pencils, British Arrows, and several of his commercials are in the permanent collection of the Museum of Modern Art in NYC.

Holiday Films is part of the Holiday United Group (HUG) based in Toronto. 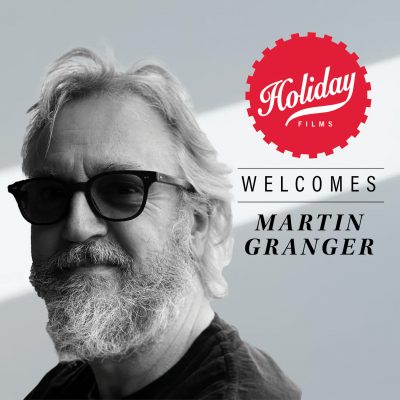